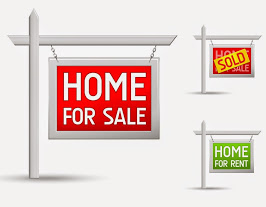 Do you sell the house to fund aged care?

November 23, 2014 By Bina Brown With Comments are off for this post

Aged-care specialist Later Life Advice has provided a case study to help explain the financial impact of four different payment choices and to show which will leave him better off.

The only way John can pay the full deposit is by selling the house. If he and his family want to keep it, they can pay the maximum daily accommodation payment (DAP) or pay a combination of a deposit and daily fees. One option if paying a combination is to rent out the house to boost his income to pay his care fees.

John will also have to pay a means-tested daily care fee of $17,163 (based on 85 per cent of the full single age pension). If he decides to keep his home, Centrelink includes only $155,823 of the value of the house in the tests to determine his aged care costs.
While your family’s finances may differ in size of investments or what the home is worth, this example highlights the sorts of issues that need to be taken into account. 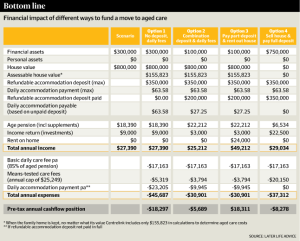 Keep home and pay no deposit
The DAP is worked out by taking the amount of the refundable accommodation deposit – in this case $350,000 – and calculating a daily “interest” payment based on a rate set by the government. At current rates it would be 6.63 per cent, which for John works out to be $63.58 a day.

Later Life Advice founder Brendan Ryan says that this option compares very badly with making some form of lump ¬contribution. This is because John is unlikely to be getting a return better than 6.63 per cent elsewhere.

So John will have to find $18,297 a year (before considering tax and other expenses) to pay the costs.

Cash flow is important because he has $300,000 in the bank, and these funds will be drawn down at a fast rate.
This is the least attractive scenario

The benefit of paying the RAD, even if only partly, is that the Centrelink-assessable assets are cut from $300,000 to $100,000. This enables John to move to a full pension While the funds used to pay the RAD are still included in the test to determine the means-tested care fee, they are not deemed to earn income. This means the means-tested care fee is slightly lower in this scenario. So John’s cash flow position is – $5689 a year.

The rental income is excluded from the age pension and care fee calculations. John’s cash flow improves to $18,311 a year.

Sell home and pay full deposit
John would have $750,000 in the bank. This would be assessed by Centrelink to ¬determine his age pension.
In terms of the means-tested aged-care fees, he’d be assessed on $1.1 million of assets.

Not only would his aged-care fees increase considerably, but his age pension would drop – making his overall cash flow worse than leaving the house empty.

John’s income from investments would go up but the increased care fees would leave him with a shortfall of about $8278.